What are the safety implications of expansion?

Existing safety concerns at Queenstown Airport would be exacerbated by more than doubling the number and intensity of flights, if allowed by expansion of ZQN’s air noise boundaries.

If the challenges and risks of ZQN described below exist at less than half Queenstown Airport Corporation’s proposed number of flights a year – would our councillors be wise to sign off on a deal to increase them even further?

What would be the impact of even one serious air accident? On the passengers and crew, our community, our environment, our health system, our economy and reputation? Growth at all costs – based on airline and QAC demands – is it worth it?

During a 2012 court case, retired Civil Aviation Authority (CAA) inspector and Air New Zealand pilot Colin Glasgow, stated that Queenstown has a “Category X” rating in CAA and airline operator circles – the highest rating according to degrees of difficulty. The main contributors to this Category X rating are:

The following incident had the potential for mass casualties.  Queenstown’s unique airspace makes ZQN far riskier for such incidents than any other airport in New Zealand.

This pilot’s report, provided by the Civil Aviation Authority, concerns a heavily iced Boeing 737 on approach to Queenstown Airport in 2007 that was forced to conduct a circuit around the airport prior to landing. The aircraft was carrying so much ice and its aerodynamic capability so seriously compromised that the pilots were just able to keep the aircraft airborne using 95% of full power.

How the Civil Aviation Authority see it

CAA annual reports over the last 8 years show a clear trend of increasing concern regarding safety at Queenstown Airport. Tellingly, these same reports make no mention of airspace risk at any other main airport in NZ.

Our safety advisor has ensured councillors have this information, with far more detail. 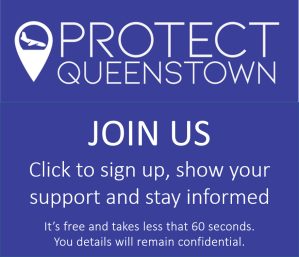